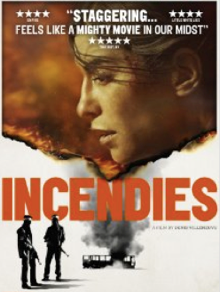 This is the first film I have included in this list of non-fiction reviews, but it should to be here because it illustrates protracted social conflict, the personal costs, and the ultimate antidote in forgiveness at a personal level.  I have often thought that the political genius of Christianity is twofold, particularly in the context of conquest and official oppression.  In the first place, it offers rewards in the next world, but that just qualifies it as the opiate of the masses.  More importantly, it prescribes forgiveness and turning the other cheek, both empowering and subversive.  It offers the empowerment of the victim, and the subversiveness of James Scott’s weapons of the weak.

Denis Villeneuve takes Wadji Mouawad’s play as a starting point, and spins a gripping tale between Montreal and Lebanon, from the 1970s to the present. It can be seen as an anthropological study of personal loyalties and choices, and the intergenerational effects of protracted social conflict, in which forgiveness is rare.  Particularly hopeful is the idea that a new country like Canada can foster the reconciliation necessary to live together in an old one like Lebanon.  The actual data on diaspora support for conflict is not so optimistic, but the vision is seductive.