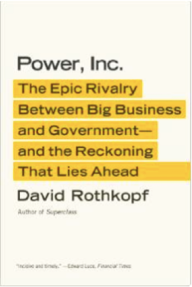 David Rothkopf was in America’s political inner circle in the Clinton Administration, putting him in good company with Philip Bobbitt, Tom Reich, and Joe Stiglitz. Each had a front-row seat on the evolving relationship between the world’s uncontested superpower of the 1990s, and the growing power of corporations operating outside the control of states. Bobbitt’s Shield of Achilles postulated evolution towards something that he called the market state; Reich’s Work of Nations focused on the importance of educating citizens for the survival and prosperity of the state; Stiglitz, in several books, points to bad policies, American errors, and corporate depredations. But a theme running through all of them is that states may be slipping from their dominant role as international actors.  This is the problem tackled squarely in Rothkopf’s book.

Like Bobbitt, Rothkopf begins with his interpretation of history. The first part of the book is structured around four revolutions: the origins of the corporation in the Europe’s emergence from the middle ages; the origins of the state in wars of religion (1648 and all that); the political revolutions and enfranchisements of the American and French Revolutions, with different trajectories; and the industrial revolution and class struggle (1848 and changing role of government). His historical sketches are more lightly drawn and less lavishly sourced than Bobbitt’s, but nevertheless compelling, and richer for the thread of corporate evolution running through the narrative.  He uses the label “the Great Transformation” but there is (surprisingly) no reference to Polanyi, though the arguments resonate.

Part 2 of the book chronicles the constraint of the state and the rise of corporate power, beginning in the 19th century, then bouncing back and forth to make the point that constraining government to preserve property rights was good, but giving the rights of an individual to a corporate entity put the state in a bind. This is a point missed by Acemoglu and Robinson (both 2006 and 2012).  Rothkopf covers four vital pieces of contemporary political economy: the legal ascendancy of the corporation; its global reach and transcendence of state control; the decline of monetary sovereignty; and the declining utility of force. All these developments reduce the power of the state as the preeminent international actor. Throughout this, Rothkopf keeps the tone of the analytical observer, treating Marx, Rand, and Hayek with the same courteous objectivity.

In Part 3, the tone starts to be more concerned, and Rothkopf is revealed as a fan of the state and its protection of individual freedoms, probably more US “blue state” than “red state”. The final two chapters address the competition between weakened states and muscled corporations, and the varieties of capitalisms. Rothkopf cautions against oversimplification: we need the energy and innovation of the marketplace, and we need the protections of the state and its regulation of the corporate super-citizens bestriding the world.  Which of the five capitalist models is likely to triumph and how will governments respond.  Ultimately, the problem is that the viral form of the corporation is agile and adaptive, but governments have been less so.
David Last, June 18, 2014