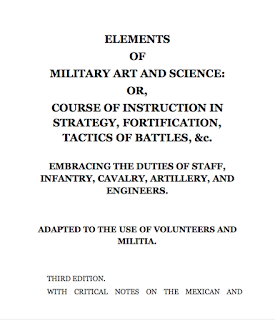 Major General H. Wager Halleck of the US Army was born a year after the end of the War of 1812, and served in the American Civil War as Grant's chief of staff and as the senior commander in the West. This book, dating from 1862 reflects the state of "military art and science" in the New World on the eve of the American Civil War, penned by a cautious and defensively-minded military intellectual. It is a free book in the public domain, readily available online. What's remarkable is the extent to which it is overlooked, but it is in good company. There is a large body of books on military art and science, most reflecting the accumulated experience of serving officers and observers.  Some, like Halleck's, include philosophical subjects like the justifications for war or the nature of the warrior, but most devote their chapters to organization, logistics, fortifications, artillery and transport - all the techniques and technology of the day. In fact, the large body of military art and science published in English and French (and probably other languages - see Gordin, Scientific Babel) from the 18th century on can be neatly divided into two categories: a few works of principle, which have survived successive republication and regular examination; and many works of practice, which have been quickly ignored and lost.  Halleck's work is in the latter category, although some of his chapters may belong in the former. His chapter VI is "The Military Polity: the means of national defence best suited to the character and conditions of a country, with a brief account of those adopted by the several European powers."  It amounts to a study of comparative political economy, options, and incentives,  including tables of data on populations, budgets, armed forces manpower, growth rates, and the choice of armies, fortifications, and naval expenditures.  But it's easy to see why anyone picking up the book even a decade later would be unimpressed. The world was changing too quickly, and the details Halleck offers are too specific to time and place, like the 1590 Wappenhandlungbuch, which was obsolete with the next generation of arquebus.  The longevity of  Sun Tzu, The Prince, On War, and even Jomini's Art of War is a consequence of generalization and abstraction.  And that is the essence of professional knowledge. The specifics will always be overtaken by change; professions that advance and compete effectively for status and power in society do so by generalization and abstraction, which serves as the foundation for the next generation of pragmatic knowledge. But Foucault's archeology of knowledge and genealogy of knowledge and practice suggests that what survives is often attributable to happenstance more than quality or even utility. Google says Halleck has been cited by 44, and most of those citing him have been cited by more than 20, so the General dismissed as 'old brains' (according to wikipedia) casts a longer shadow than most of his contemporaries.
Posted by David Last at 2:29 PM